Population of the OBS database

The OBS database contains the data used by the OBA/OBR workflow. It contains the concepts and terms used for direct annotations as well as the relations between concepts used during the semantic expansion step. The OBS DB is populated using 3 access tools (ObsUmlsAccessTool, ObsBioPortalAccessTool and ObsJaxAccessTool) that implement a common interface (ObsOntologyAccess). The OBS DB is accessed using a tool called ObsOntologiesAccessTool that implements also the same interface. cf. http://obs.bioontology.org/docs/model/EARoot/EA3/EA67.htm

To populate an OBS DB used the Populate.java or PopulateObsTablesTest.java programs.

Optra & Clement are working on a instruction document to be posted here soon. 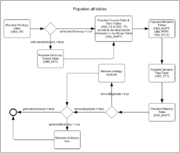